A new level of commitment

I'm not big on commitment, which is why we don't have a dog, but we finally took a big step toward a long-term relationship. 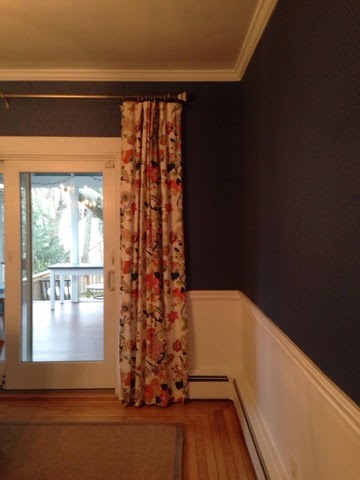 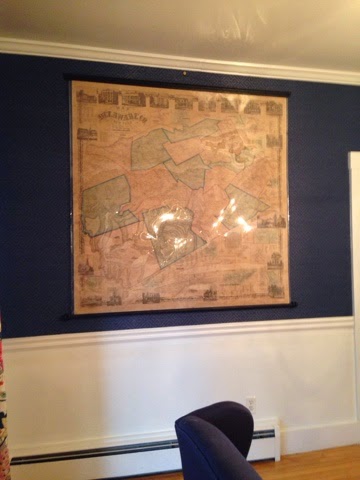 In the dining room. 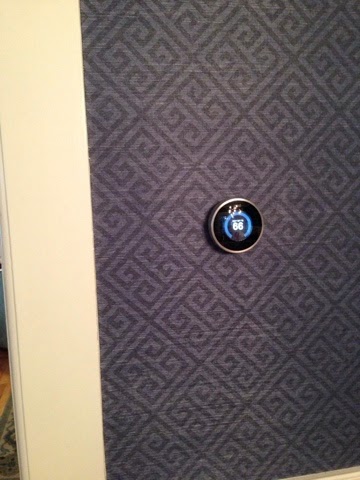 It's feels like a grown-up lives here now!
Posted by Jessie at 2:56 PM No comments:

Two years ago I drastically changed the way the adults in my family exchange gifts. It removes the stress of the season, and this new way seems more in line with the Christmas Spirit. We had tried myriad ways to do a gift exchange: Pick a name from a hat and give to just that person, Give a little something to everyone, Don't give any gifts. I had grown weary of gift giving and of providing "my christmas list" to my family. It didn't seem like what Christmas was really about even though there was plenty of giving and receiving.

Then my friend Sharon proposed a gift exchange for the office party that changed my life. It wasn't her idea originally, she had gotten the idea from Oprah.

You know when Oprah finds a great product, she buys one for everyone in her audience? Well, that year my office did a gift giving party where everyone brought "their favorite thing" and shared one with everyone. We had a $2 limit, per person. There were 22 people in the office, so I wrapped 22 of the same item and distributed 1 into each stocking.

We had a party and opened each item and tried to guess who it came from. It was fun and we received unexpected things.

I bought everyone a k-cup of "chocolate donut flavored" coffee. Other items gifted were small book of sudoku puzzles, a ball point pen, a candy bar, a laser pointer... The point is, whenever I do a sudoku, or the kids play w the laser pointer, it makes me think of the person who gave it to me.

I proposed this plan to Jeff's family. It was simple. Think of what your favorite thing is, and buy one for everyone. The recommended range for the gift is $25, per item. This could be anything that YOU think is cool, maybe you found great wool socks, a flashlight, an US weekly subscription.... You would just buy 6 of that item and be done w Xmas shopping for the grown ups. It doesn't matter as long as YOU like it, don't worry if I will like it.

I was a little nervous, since there was a chance I could ruin Christmas for my husbands family.

On Christmas day, it was a hit! We received an assortment of gifts that really are more personal to the giver. My mother-in-law, who thinks coffee that isn't hot enough to give a 3rd degree burn is too cold, gave travel mugs that keep coffee piping hot for hours. I gave a wall-charger that has 4 outlets and 2 USB ports, which stopped the constant unplugging of each others cell phones in our kitchen.

The next year I sold it to my family and it went just as well. I think of my brother whenever I wear an Under Armor shirt for a run. I think of my sister when I put truffle salt on, well lets be honest, everything.

Its fun to see what others have found for their favorite thing for the year.

We also brought the Beechnuts into it. They gave their favorite things last year. And they spent a lot of time thinking of their favorite thing this year. The big Beechnut even used her allowance to buy her gifts this year. Which is what I wanted in the first place, to have a meaningful gift giving experience, and not just ask people "What do you want for Christmas"

I know its a little late in the year for this post, I'm sure it would have been more helpful to have this in September so you can sell it to your own family, but now you can be ahead of the game for next year.

Posted by Jessie at 7:01 AM No comments:

Right before you have 6 house guests coming is the correct time to start a project right??
This was our dining room on Sunday. The chair rail has always been highly annoying, its basically a window molding and its so low my chairs leave marks on the walls. Its bugged us for 10 years.


We pulled off the chair rail and discovered this craziness. Bright pink paint and dark pink, gray, blue wallpaper.

The other side of the wall had a different wallpaper. Who used to own this house anyway? Romper room? I'm ignoring the signs of water damage.

Now after many, many pencil marks, a compound miter saw that was used for something other than collecting dust, a laser level, and lots of finishing nails, we have a paint-ready product!


We used 2 pieces of trim - a baseboard and a chair rail - to make it a little beefier. Jeff cut the exposed ends to 45 degrees.

And of course we had to upgrade the thermostat to this fancy model, the Nest. When the light is off, I pretend its HAL and that its watching me. 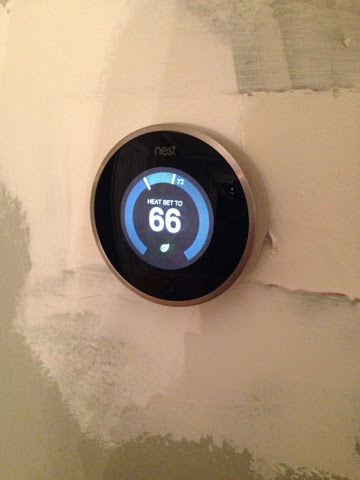 Just needs wood putty, paint, and I have to decide if I'm going to really upgrade the whole thing with navy blue wallpaper. I'm sure HAL will tell me what to do...
Posted by Jessie at 11:12 AM 1 comment:

In an ongoing effort to improve our curb appeal, we decided to have a lawn that was alive and a new walkway to entice people to knock on our pretty front door. The old concrete walk was replaced with a wider bluestone path. 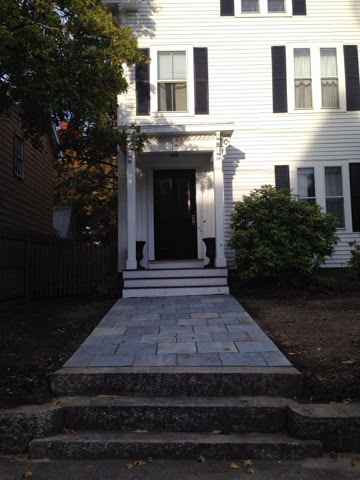 The entire lawn was torn up and reseeded. 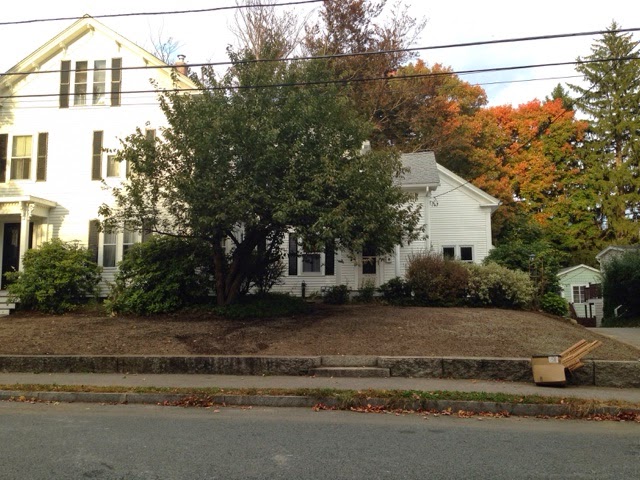 This will hopefully grow into grass and be lush in 21 days!
But one more look at the bluestone... 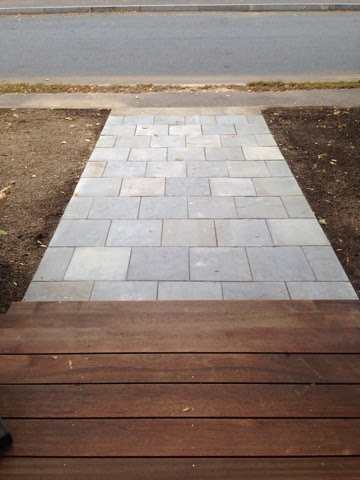 Makes you want to visit, right?
Posted by Jessie at 1:11 PM No comments:

Death of a Beech Tree

Our Beech Tree has been dying for a while. We didn't want to face it. The tree was the reason we bought this house in the first place. We've had hot, dry summers the past few years, combined with some construction on the street and rebuilding the deck. The arborist came out today and looked at the tree and delivered the bad news: Take it down.
This is what it used to look like, large and majestic, towering over the house: 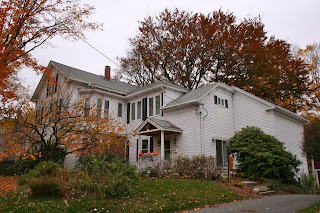 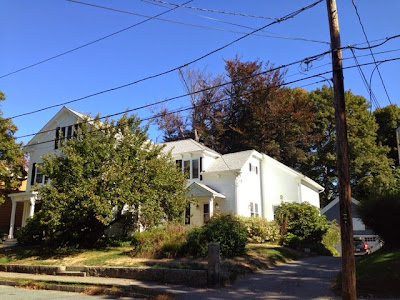 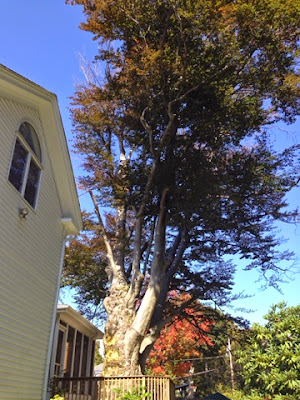 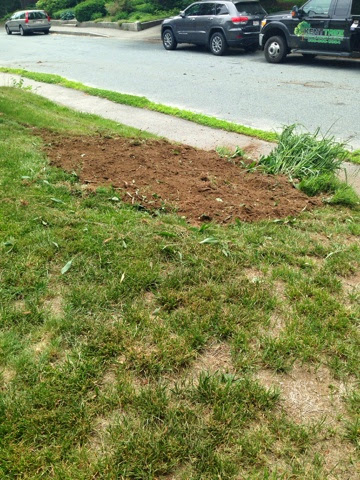 We had a dead maple tree taken down from the front yard over 4 years ago. They left the stump. We couldn't figure out what to do about it. Then this morning, I heard a commotion outside. The neighbors across the street were having their stump ground by a landscaping company that had a remote controlled stump grinding machine. I talked to the landscapers, and he agreed to grind the stump in our yard, and literally 4 minutes later it was gone.


Now what should I plant?
Posted by Jessie at 12:57 PM No comments:

Little by little, it's coming together

Last year we replaced a slider with a window in the kitchen. In order to save money, we decided to paint it ourselves. 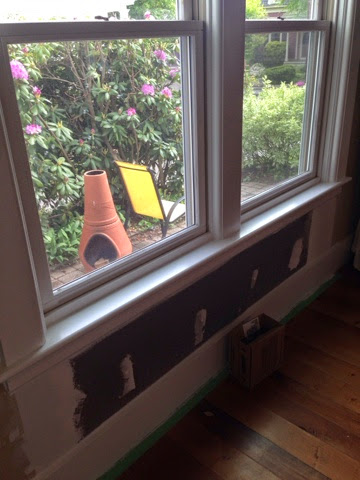 So it sat unpainted for almost a year. 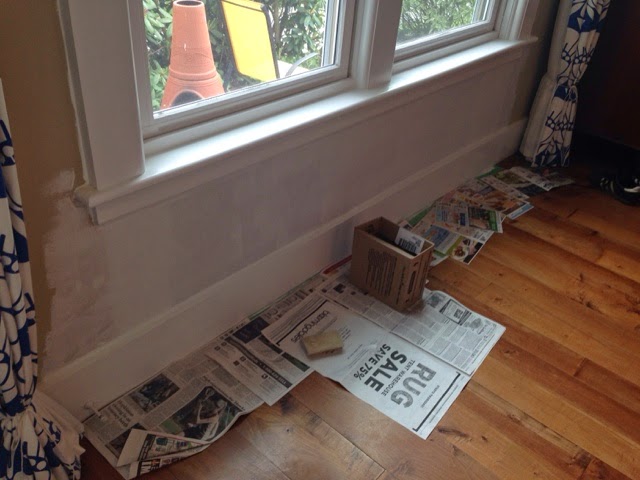 But we decided to buckle down and paint it over the past 2 weeks. 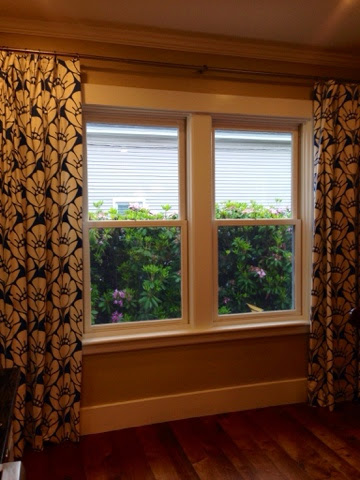 I'm happy to report it's done!
Posted by Jessie at 6:21 PM No comments: